he is initiated on Absolyut channel,
International Master 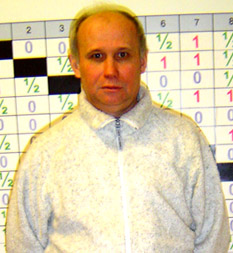 According to the information which has been received over a channel "Absolute" of our Lord Jesus Christ, dedicated to the issue of this book into world, we may inform the following: "Chess game was born for the first time in the Constellation of Pleiades! And many people living new on the Earth are of origin from Pleiades Galaxy. That's why many famous chess players on Earth were and are now people from Pleiades. They could play chess still even when they had lived before long in the Pleiades. And having been born again here on the Earth, they master easily this play as the memory of their souls kept that what they knew so well still in that very far-oft time when they had been living their lives in that distant Constellation". Many people living now on the Earth are also former dwellers from the Orion Constellation! That is, they are Orioners (from Orion) when chess existed very long ago as well. Chess game was born not in India, as it was accepted on the Earth, and not in Egypt, still 2000 years ago. Chess were included into a program of at Initiating Mystery Schools:"

"Chess were given to Earth because people living in unlove of themselves and consequently of all other people were warring in-between all the time. In order to extinguish bellicosity and aggression among people we, Hierarchs and Sovereigns of Earth planet, gave for this purpose chess to the Earth. For, when people are warring of the chessboard, then they want less to hate other people and to fight against them. And that is why there are nearly not aggressive and martial people among chess players. And chess were given to Earth for the aim that people of all the Earth could unite through them and make Friendship! Thus the motto of All-World Chess Federation (FIDE) "GENS UNA SUMUS" ("WE ALL ARE ONE FAMILY"), was also given to Earth by us, Hierarchs and Sovereigns of the Earth planet by no means accidentally!" And here is how the Hierarch recommends a young player to develop himself harmoniously that he would become a versatile gifted personality and could play chess well. He should, first of all, follow the primary Universal Law which tunes:

This is a small fragment of comments alone to the book of Yury Petrovich, given by the Hierarch and Sovereign of our Earth. Let you consider if a fantastic fiction, or even fantasy. However, the most people have not for long already considered as a fancy the contents of the Bible, other Spiritual books, for example, those by E. Blavatskaya, prophesies by M. Nostradamus. Non-traditional capabilities and capacities of the human are not rejected, but move often something is still explained by science itself. However, science can in no way comment in earnest for example, what is it a talent i.e., its materialist essence? Don't hurry to reject bluntly what you have already read!

The History of a Photo.
Pavel Bogumil.
A book about how to become a Loving and Forgiving man.
Channeling. The "Absolut" channel.
"JESUS CHRIST. THE HISTORY OF CHESS AND LIFE IN THE UNIVERSE"
"COMMENTARIES OF THE JESUS CHRIST TO THE BOOK "DIVINE CHESS" BY EUGENY BARANOV AND YURY RYZHKOV.
"JESUS CHRIST. DECLARATION "
Yury Ryzhkov.
""The Divine chess"
"The newest franks of investigator"
"Instead of a review. About Yudasin's book "The Millennial Myth of Chess"