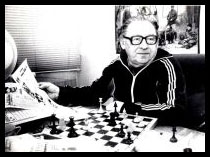 Many chess amateurs know the name of Victor Afanasievich Charushin! International ICCF Master, candidate of technical sciences, assistant professor, author of several books and large number of articles, Victor Afanasievich has devoted not one ten of years to the ancient game both as a chessplayer and a researcher of creative work of outstanding chess master of the world. Search for little known and half-forgotten chess games, analyses, articles written by grand masters, is a key-line in his writer's laboratory. Many of them are due to the exertions of Victor Afanasievich. It was a great intricate work, multy-year correspondence with holders of archives and libraries in different countries of the world. I remember how myself was draw by the author into for Vassily Soldatenkov's chess games, which afterwards were included into his book "The Mysterious Naval Cadet".

And how many games by A.Alekhine, E.Bogoljubow, K.Junge, S.Tartakower and by other masters were not known to wide public, - he himself has know only...

He has known, but on the second of May this year Victor Afanasievich was no more.

His organism could not fight any more with insidious, illness, which had been undermining him for a long time. This year he would have been 70 years old.

In my view, the most felicitous of his researches were:

In addition Victor Afanasievich looked into combinational techniques, and composition motifs as well. Such know books as Alekhine's Block" (1996), "Mitrofanov's Diversion"(1997), "The Cross-Combination" (1997), "Lasker's Combination"(1998) went out from under his pen. All of them were published also in other languages, in particular, the last four were done in English in America. What can be done, if our researcher in chess history proved in the last years to be more needed over the ocean than in his own Fatherland. All his works in Russian, excepting the last one, were edited in a humble fashion at the GAS printing house in Nizhny Novgorod where the author lived for many years.

His "excavations" did not always coincided with view and publications of official chroniclers, and of course not all of them liked it. Victor Afanasievich was blamed for what he could not ever think about nationalism and other sins... I mention here the biggest happening. The article by V.A.Charushin "The Testament of Klaus Junge" (64-Chess Review, 6/1997) caused greate resonance. The author permitted himself in it to doubt M.Botvinnik's authorship of the famous system in Slav defense. I do not undertake to estimate the author viewpoint. I take a note only, that in one of his last letters to me, V.A.Charushin recollects bitterly: "... Analyses of Klaus Yunge" (in a copy) were given over to Y.L.Awerbach. The editorial staff of the magazine "Chess Gerald" inform me many times of the intention to publish them but apparently, in order not to offend M.M.Botvinnik, it did not publish them, keeping them from the chess public...".

His manuscripts about M.Stolberg and S.Tartakower (in two volumes) and very many stills remained unpublished kept in his portfolio. During the last months his articles were exhibited at "Victor Vision". English-speaking chessplayers must be registered to have access to his articles.

Straightforward, frank character of V.Charushin, absence of pragmatism in his researches and choosing of historical personalities divided the view of critics about his creative work... He did not live up till his 70 year (23d of November) half a year only.

However, such people cannot go away forever, they remain in the memory of people, and in their creation.

I remind our Readers that they can buy books by V.A.Charushin and practically any chess literature magazines, etc. in a virtual shop on the site BS-CHESS. Summer rebates are still effective further on!

I shall familiarize You with the best book novelties of the year in the next reviews. Attention will be given to books of the past years as well. Please send your wishes and comments. Who knows, it is you, may be, who will succeed in suggesting the most convenient form of the survey of interest to all lovers of books!