"Having taught others, them teach themselves".

Well-known philosopher L.Seneca considered so. One of the book by I.Slavin begins from him. Much is said by this. You have know yourself explain, help to understand it to others. Today our story will go about the book in many volumes by Josef Lazarevich Slavin, professional pedagogue and trainer. 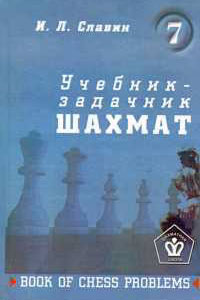 "Chess Manual problem solver" series includes in it eight manuals and eight problem solvers. Odd-number volumes are problem solvers, even- number ones are manuals. Only seven books "have seen the world" until now. This is a four-level chess programs with detailed educational material. Each level of education consists of two manuals and two problem solvers. On the whole, it is a system of preparation from beginner up to a Grandmaster, which is proved by the trainer's practice. The books provide for valuable education and self-education of pupils. Thus, it is clear for whom are these books. Every chessplayer can find that book which is he is needed to increase his chess power. On my view, they are nearer to experts, the trainer's colleagues at their "shop". And the matter here is not in setting for the material. It is offered in an easily understood form. Complex notions and pedagogical knowledge are laid out in common language as in saucer, without usual sometimes artificial classifications.

There are about 300 pages in every volume that at the present makes some obstacle for not too persistent young chess pupils. However those who will manage the barrier will be sure to get a prize, - climbing to a new stage in chess hierarchy. The series includes sections in all stages of the chess game, openings, middle of the game, and endings, problems of strategy and tactics. Studying of a selection of typical attacks, for example, from the two -knights defense (volume six) will be not without interest of any qualified chessplayer. Speaking of the opening the author follows a principle, having said already by R.Reti "The main thing, it is mastering ideas, methods of thinking, an only then variations, and details".

The structure of Construction of manuals and problem solvers is based upon traditions of the classical chess school. The forms selected by the author - is a requirement of the time and changes which take place in chess. The concentric structure of chess material, that is, its repetition and extension intensify the process of education. The whole chapters are devoted to the methods and didactics of education. The principal direction of the books, it is development and improvement of own work of pupils. All offered educational material requires constant strain of the thinking efforts of pupils. The structure of books is based, upon the most effective problem-task method of education which was a little used in the past.

All the books by J.L. were well reviewed and got recognition from all regions of Russia, from the near and far border countries.

The manuals and problem solvers are widely used for universal education, education in Children-Youth Sports Schools and Creative Youth Houses.

The author knows from the letters of trainers about a number of achievements of pupils in the regions. Many trainers buy books at money of parents and set up libraries in chess clubs.

It is interesting, that International Grandmasters E.Zayatz, E.Ovod and others use the books are used for their preparation. The educational material for books has been gathered for 20 years.

The books author and his wife Slavina Galina Nikolaevna - the highest category trainers, worked successfully as a methodic brigade in Byelorussia, and now in Russia. There are master of sports and candidate masters, boy and girl-champions of Russia and Byelorussia, winners of many all-union competitions among their pupils.

They managed most fully to use the educational material in preparing and training International Grandmaster Irina Slavina. Her stable high results in junior and grown-up are known everywhere. It is of no small importance that they were achieved without use of computer.

It were edited seven books (three manuals 2001 and four problem solvers) in 1998-2001. One can order and buy a full series, or any of volumes at accessible price through our BS-CHESS site, with a reduction for Russian chessplayers!