Everybody knowns the name of well-known Grandmaster, chess professional Genny Sosonko, especially in literature and journalism.

Last year (the third of September) presentation of the book, even the title of which astonishes many people took place just in the centre of St.Petersburg Fontanka, 90.

"What, he knew Capablanca? And Capablanca, did he know him?" Such or similar sarcastic questions could be often heard. And having read this book only. Reader will be able to appraise the author's literary and publicistic talent empathizing deeply with his heroes from the first up to last page. 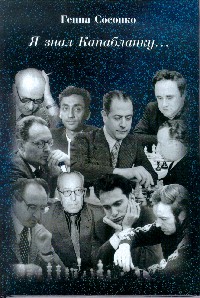 Among them three chess kings: two Michails, Botwinnik and Tal, certainly, J.-R.Capablanca, outstanding Grandmasters Lev Polugaevsky, Grigory Levenfish, Yefim Geller, "king's trainers" Semyon Furman, Alexander Koblents, Vladimir Zak, talented tactical player, chess master Alvis Vitolins. Life and creative work of each of them rushes in the vortex of evens and leaves unforgettable tracks in memory. Especially one is attracted by that G.Sosonko does not embellish his heroes beyond recognition, what sometimes in "writers" sin against. Never the less, he tries to bring into the Reader's memory the events of far and near years considering the circumstances of those times... But everything begins from his autobiographical essay.

I remind my Readers, that Genna Sosonko was born in Leningrad, studied in the Leningrad University (Geography faculty), became Soviet master of sports, worked as a chess trainer in the Palace of pioneers known thoughout the Soviet Union. After emigration into Holland, Genna began to co-operate with the magazine " New in chess", he had possibility to play chess actively among professionals and "as far as successes increased, practical chess play occupied the first place".Beginning from 1974 he played for the team of Holland in Olympiads, European championships and other high-level tournaments. Here it is what the author is writing of himself: "Chess has given me very much. This play world is life in a miniature. One must not also take a move back, and time for game is also limited..." And further on "Looking at today's chess, one may say, that their present is indeterminate, future is alarming and the past only is always brilliant... "

Fragments from this book have been published in Russian magazines already and caused true interest of the chess players in particular who had happiness to know its Heroes. Inquisitive reader must find a good dozen of useful aphorisms and carefully selected events, stories, advises, opinions of other well-known Masters. I will bring some examples for clear proof. Really, one can not say and relate better, than G.Sosonko. His conclusions are distinguished with unusual deepness and do not look as edification.

M.Botwinnik said: "No, chess did not changed, did not become others -this is all fairy tales for little children. It is easier now to get the original information, and process of the analysis remained the same. The chess player should analyze himself, and much, and nothing can statute for analysis..."

About Y.Geller: "He understood early an old truth that luck is waiting for him who has prepared for it... A chess game is not a theorem, and not the most logical and consistent wins in it, but not rarely the most steadfast, cunning or simply lucky, or happy..."

Or here is the more: "In old times they looked simply at a problem of improvement in chess. "There is no special wisdom in this game, and if one strives to be a professional player, he should only more often practice himself in it" - so wrote Shiffer's "Chess Magazine" in 1894. However, training, studying special chess literature and analysis became obligatory in order to enhance strength of play even at amateurs level, though real capacity for chess preparation means not so much to work assiduously as to work correctly. The truth which is often forgotten by amateurs who try to achieve success in chess and do not spare success in chess and do not spare time for their improvement..."

Limits of the article do not permit to relate of this remarkable book in more detail. about this strange book. A whole team of the Petersburg Publishing House "Levsha" was working at its creation and assisted by the St.Petersburg Chess and Checkers Art Academy. At the presentation friends and working colleagues greeted Genna warmly with the publication of the book and wished him new successful creative work. This selebration party was of non-official character and passed free and easy. The author's all thoughts are deep in new work already... 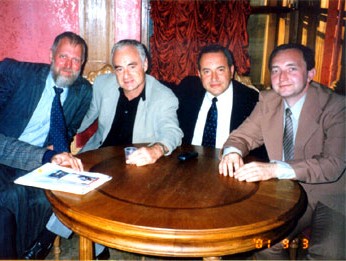 This book is intended for those who have not forgotten yet how to think on one's own. You may order the book "I know Capablanca..." by Genna Sosonko directly of BS-CHESS site. Read books by G.Nesis and A.Khalifman and "Manuals by Mark Dvoretsky" in the next reviews.