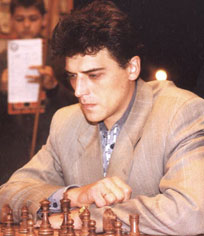 T he chess Federation of Pushkin region of Saint-Petersburg asks to render material help and moral support to the Region's strongest chess-player, master-candidate Schukin Dmitry Victorovich who, as a result of an accident, occurred disabled for a long period of time and needs a stationary medical treatment.

This accident happened during the All-Russan's chess championship among boys and girls in Dagomys (near Sochi-city), on the mini-football field. He was transported to the local hospital with concussion of the brain and other serious traumas. He was placed into the tramatological department of the hospital, where he stays at present. After his general state stabilizes, he will have to undergo several plastic operations.

On behalf of all his friends, his colleagues-chess-players and trainers - we wish D.Shchukin the soonest recovery. You also may draw nearer this day. Those who can and want to help may address to:

The first who responded to our call were collaborators of the Alexandre Khalifman site http://www.gmchess.com/. We will regularly inform You about the health state of Dmitry Shchukin. Remember, that a disaster may happen with each of us, and the methods of solving the arisen problems are fully dependent on citizen's and human positions of each of us. Don't be indifferent to other people's troubles!

The best achievements of D.Shchukin are the following:

In continuation of the above-mentioned the following is known authentically. After Dmitry's returning home, being supported by his wife Irina, he has received a direction to pass inspection and treatment in the 2-nd city hospital of St.Petersburg. Recently it has become known that during the fall his backbone was damaged pains of which have all the more effect. Necessary plastic operations on the person (his face) are coming further on. Now Dmitry's general condition is satisfactory, but not stable. He cannot in high-grade accept food and to speak. The treatment will be carried out, at least, 6-9 months.

On May 21 operation on Dmitry's backbone was carried out in the Army medical college (branch of neurosurgery). Dmitry Shchukin's state of health is satisfactory. Depending on duration of the postoperative period it will be decided about terms and amount of operations on the facial part of the head.

You can offer another case of transfer money.

Dmitry and him family are many thanks everybody for help.