On fourteenth of January an International Youth tournament "The Cup of Spassky - 2007 " passed in the club named after B.Spassky, which was dedicated to the 70-th birth anniversary of named world champion. The juniors who had achieved great successes for the passed years took part in the competition. The champion of Russia among young men M.Matlakov, the ex-champion of Russia among juniors A.Shimanov, St.-Petersburg champion among juniors till 18 years Edward Gorovykh, a representative of Leningrad region International master Daniel Linchevsky, prize-winner of the world Volodimir Onishchuk (Ukraine) participated in it as well as pupils of the club named after Spassky, St.-Petersburg champion among young men till 16 years Rafael Barkhudaryan and many-time champions of Estonia Alexander Volodin and Valentina Golubenko. All the participants have International master title, and M.Matlakov is waiting for a title International master. The organizers dedicated the tournament to the 70-th birth anniversary of the tenth world champion Boris Spassky, and this date will be celebrated in January, 30th. 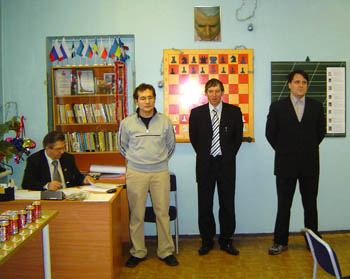 Three vice-presidents of St.Petersburg Chess Federation former K.Annenkov and S.Ivanov, and S.Ivanov , and actual V.Popov were present and at the opening of the competition.

In his speech vice-president of the St.Petersburg Chess Federation Grandmaster V.Popov observed rather optimistically, but quite reasonably, that soon its participants would probably become Grandmasters, be participants of the most prestigious International tournaments and many times "Draw their swords" in-between. Valery Sergeevich called on all of them to take care of the work of the organizers of chess tournaments and take participation in such competitions more often. 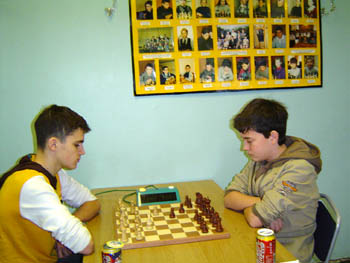 The first (on the right) and the second prize-winners met already in the first round.

After a short official ceremony the tournament itself began its own course, the eight juniors (a girl, an International master Valentina Golubenko from Estonia was among them) played out prize places. They proved, according to the law of a genre to be eight are will... 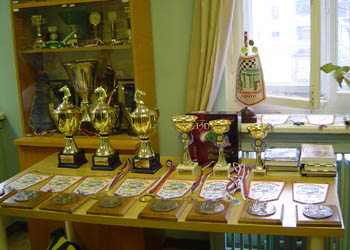 The firm "Shakhcom" organized display of the games of leading players in a real time regime, and Grandmasters V.Popov, S.Ivanov and D.Evseev took floor before the pupils of the chess club named after B.Spassky in sharing secrets of their chess mastership. 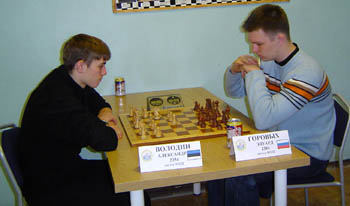 An encounter of two champions (Estonia and St.-Petersburg) was completed by a victory of the second one. 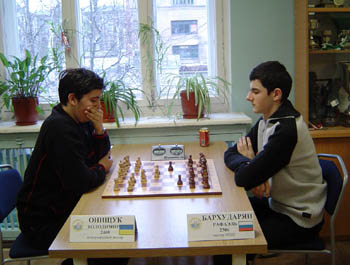 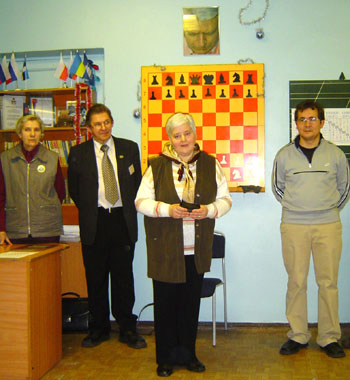 B.Spassky's sister Iraida Vasilevna said words full of feeling. She related that "she is working as usual as a children's draughts trainer and has come to the tournament from competitions where her pupil won, that it's very pleasant to her. Boris like all people of our generation had on the whole a hard life. Boris could even die during Leningrad blockade when our family was evacuated, but he was saved..." Young chessplayers got still more advices from the mouth of International draughts Grandmaster simply a remarkable spiritual woman. 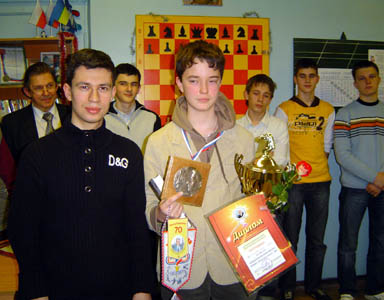 The winner of the tournament (at the center) is Alexander Shimanov with champion of Russia 2006 Yevgeniy Alexeev. 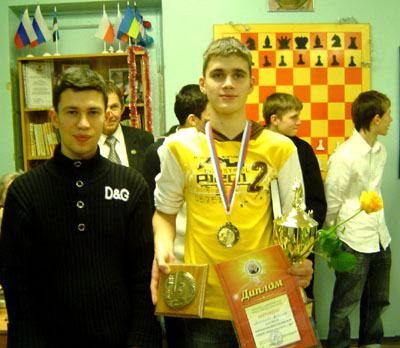 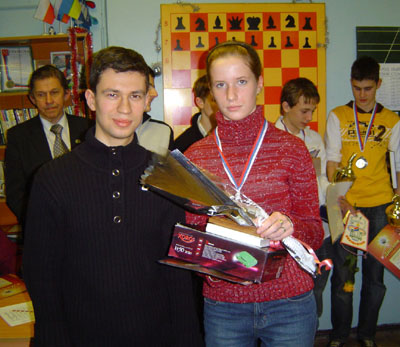 Zhenya Alexeev was not only willingly photographed with the participants of tournament, but he expressed his parting wishes as well. 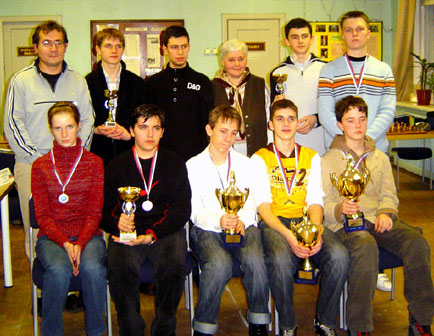 A collective photo of participants with champion of Russia Ye.Alexeev. and I.V.Spasskay (they are in the center, second now) and director of the Chess Club named after B.Spassky K.Annenkov. Only during the closing of the competition B.V.Spassky's greeting was read to the tournament participants. In his address Boris Vassilievich congratulated all the participants and, in particular, recommended "everyone to take care of his king and not to get matt... ". All having the word in this or that manner expressed their gratitude to the Chess Club named after B.Spassky and personally to its director K.V.Annenkov for a finely organized tournament. It would serve without any doubt to further popularization chess both in our country, and in whole world.