Dear chess lovers! From May, 14 to 27 the town of Kirishi will receive a star body of participants of the fifth International chess tournament "World Young Stars - 2007 in Vanya Somov's memory." Twelve juniors from six countries take part in a Srandmaster-norm tournament. Jan Nepomnyatshchiy is a rating-favorite as in the past year and he is helped Grandmaster S.Janovsky, senior trainer of the Russian youth selection team. As in the past the competition passes in a Game Hall of the comfortable KINEF House of Culture which was built some years ago in full accordance with European standards. All the boys have a cosiderable service list which everyone may take easy acqua significant track record with which it is easy{light} to familiarize on an official site. I can say only that successes of each of young chessplayers are growing from tournament to tournament. The tournament opening passed in a concert hall of the Palace of culture, it was hardly able to accommodate all wishing to be present. By tradition an official part was preceded by a theatre-like performance cast like Russian fairy tales. After the official speeches, director of tournament G.E.Nesis, awarded trainer of Russia declared the tournament to be open. 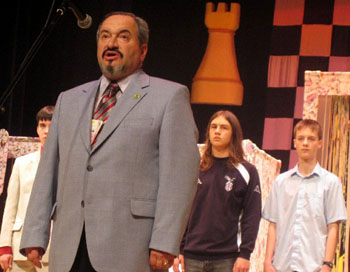 The main referee, International arbiter J.D.Zinder, a veteran of Great Patriotic War, made a lofting fulfilling an honour commission assigned by the Organizing Committee, for the fifth time already. After this solemn procedure, the participants were photographed, and Grandmasters D.Yevseev and S.Janovsky passed simultaneous chess displays. Everyone had 14 rivals each. But if Sergey Moiseevich was resisted by cadets of the Petersburg military colleagues, than Denis Sergeevich was opposed by, except young Kirishi boys and girls, still more by region first-category players and master candidates. Both Grandmaster displayed high class and won convincingly. Pupils of "Gambit" chess club, first category players Vlad Smirnov, Victoria Samarkova and Alexander Sachkov succeed in drawing with S.Janovsky, and D.Yevseev had games recognized as drawn against Akhmetova Natalia, and also grown-up first-category players Anatoly Barvinenko, Vitaly Kharchenko and again master candidates Vladimir Jamshchikov, Vyacheslav Jakovlev and Oleg Kolbasov. The first round is played. The competition would continue up to May, 27th. All struggle was ahead! We would follow observing a tournament struggle, and inform you of it, dear chess lovers. Remain with us and you would be sorry! 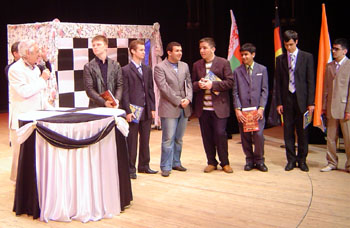 The participants in time of lotting.
It is done be main referee IA Ja.Zinder (on the left). 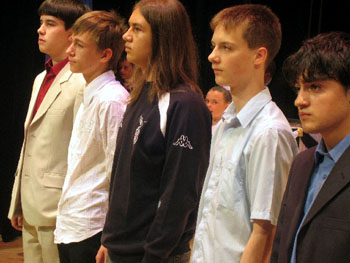 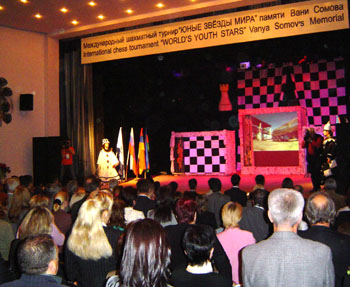 KINEF hymn is being tuned. 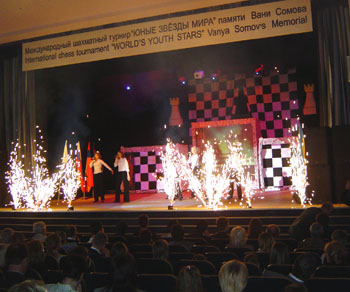 And fireworks is being done in completion! 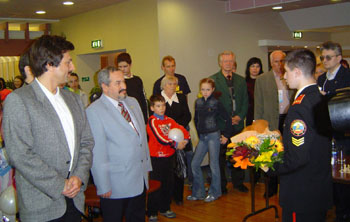 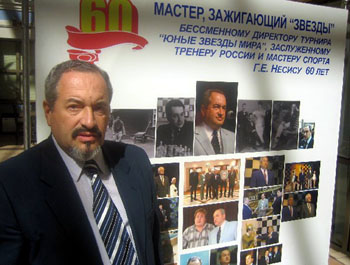 Gennady Nesis at the stand in the honour of his 60-ies anniversary.
All celebrations are still ahead! 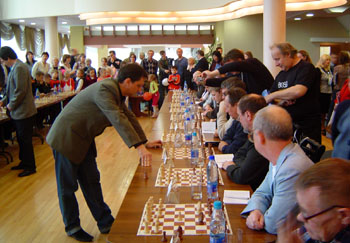 During simultaneous chess game session. In close-up: D.Yevseev, S.Janovsky on the left.