12.a3?!
White is obviously afraid of advance b5-b4, but the black pawn being at c4 such a move does look good. It is more logical to hinder the advance by way of 12.b3!?.


12... Nc7 13. Nf1 Nb6!
Jan's experience in the game with Alexander Lastin was evidently of use; Black does not lose in vain and quickly prepares moving the queen to the kingside. 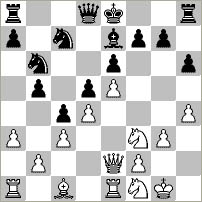 15... Kd7!
Another step of the thought of earlier plan. However one cannot help from nothing such a move.

16. N3h2 Qg8
Aiming at h7 squire. The black queen will be able from it to hinder the advance of f2-f4-f5 and if needed, have influence on White's queenside along b1-h7 diagonal.

In the reference{link} from native flank the black queen feels not bad.


White chronic weaknesses are being formed ones on the queenside. One must seek play on the other part of a board. It is seen better 18.h5!? Rhc8 19. Ndf1 with a subsequent 20. Ne3. 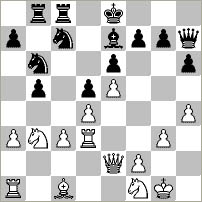 22... Nca8!
Jan obviously is at his best. By a number of original maneuvers this tournament game is out of competition. The black knight goes to the c4 square through an angle of the board!

30. Bc1 Qh7 31. Nb3 Kf8
White pieces are stuck on the queenside, forced to defend their pawn weaknesses. There is even no talking about the attacks on the kingside. In such a situation Jan considers it possible to bring his king back to usual residence on the kingside. 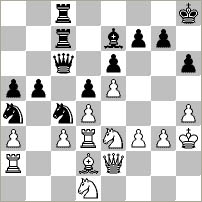 42.f4?
White has bothered torment. He decides to give away a pawn in order to try having a go at the black king. More stubborn was 42. Nc2. In this case Black evidently had to open the second front and decide f7-f6 advance.

45... Qb5!
One excellent moves more. The White's strongest piece will be tied now with defending the rook. 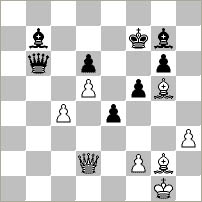 32. Be3!
Nothing threatens a quick end, but Black has the queen under stroke now and he decided to take her away with rate.

37.c5!
The White pawn is aiming at a prize squire. 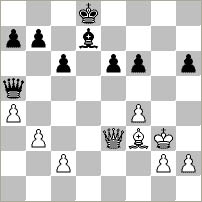 29.h3!?
Safe h2-square refuge is prepared for the White king. 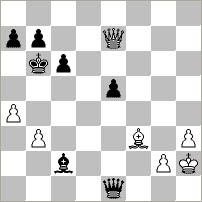