The day before the 80-th chess championship of St.Petersburg among men was over. It passed in a stubborn struggle. One could not determine a champion up to the last day. Where it came to light that three chessplayers came up to finish, having gathered 6.5 points out of 11 each, one had to count Berger's factor.

It proved to be higher for Grandmaster M.Makarov. Marat and his family moved here not so long ago from Novosibirsk and as Grandmaster S.Ivanov remarked in half-jest and half-earnest, became a champion of city by "tradition" D.Yevseev had already a similar case who had come to the Neva city from Murmansk. Grandmaster M.Makarov is working as trainer at the "SDuShOR" of the Chess School and the DDYuT of Kirovsky district. 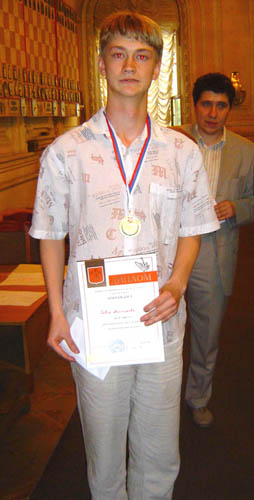 The second and third places belong accordingly to International master P.Anisimov and M.Matlakov. One cannot say that Paul plays chess regularly. He combines rather his favourite childhood hobby with studies at the "GASU" post-graduate studentship. And he does the both successfully what is a great rarity and present. As for a school pupil Maxim Matlakov let us hope a spell of relative failures has passed away. In cultivating his abilities with proper zeal and observing sports regimen a talented young man is likely to wait for loud victories in competitions of the highest level! In the last round in order to catch hold of the first tournament line, even at such a chess lay-out, Matlakov had to beat a a many time champion of the city. Valery Loginov, and Maxim coped with the task! We congratulate a victor and prizes-winners with great success! The fourth place belong to Grandmaster Vassily Yemelin "having stayed too long" at the start. He has six points. Masters S.Solovyev and R.Lovkov have the same and occupy the fifth and sixth places accordingly. As "people's referee" L.V.Kalupin said at the tournament closing, it is difficult to remember, when 2.5 points in all could separate the winner from a lost-place chessplayer! The championship has displayed, that a worthy chess shift is growing in the Neva city to oppose the Grandmasters. And chess becomes more and more an occupation for young people who take more frequently high places. There are many reasons here, and everyone will find without difficulty one's own. Considering that chess federation of our city is "de facto" a bankrupt, moreover, its management has deviated from organizing and conducting the championship, a prize-fund has at first lucked at all.

Under these circumstances V.V.Bykov has allotted some money for the prize. A pitiful situation has turned out when they can remain without a club "On the Petrogradskaya (side)" and for some time without the federation. Well, every cloud has a silver lining. Mounding of free volition of the people makes only first steps after a considerable interval. And if it is discovered that chessplayers are still in need of the chess club and federation honestly in the interests of all such a federation will be elected sooner or later. And money means will be found in our country! Towards the end of reporting we wish to thank chairman of a trainer committee at the SPChF in the person of IGM S.V.Ivanov who directly was busy with organizing the present championship and management of the "SDyuShOR" of chess club names after M.Chigorin in the person of S.M.Vinogradov for assistance in its being carried out chess games were in no way demonstrated and were only put forward in the Internet. The participants had good conditions for playing. The numerous fans that filled in usually the first rows before the scene of main tournament hall did not bother then. Here is a question alone: for whom did the chessplayers play and were they sportsmen during this championship, if remains without answer : We would like to believe, that such an experiment will not be repeated again, and leading chessplayers will play out a title of the strongest in a championship with a good prize fund. And the fans will be able to delight in their art performance like this or otherwise in a real time mode. Technical results: 1. IGM M.Makarov, 2. IM P.Anisimov, 3. MC M.Matlakov - 6.5 points each out of eleven. 4. IGM V.Yemelin, 5. IM S.Soloviev 6. FM P.Lovkov - 6.0 points each. 7. IM A.Smirnov 5.5 points. 8. IGM V.Loginov, FM M.Zakurdaev - 5.0 points each. 10-11 IM O.Biryukov, IGM D.Yevseev - 4.5 points each. 12.FM A.Lanin - 4 points.